My condition came to light at the end of 2008 when I was 34. I’d been to the doctors to discuss these strange palpitations and dizzy spells I’d been experiencing, but was sent away and told it was due to “stress”. This seems to be the usual response from a GP the first time you report these symptoms. I remember thinking, I didn’t even know I was stressed but perhaps I was and this was how my body was coping.

Fitness wise, I was reasonably active. I swam and ran every week and generally felt well, so wasn’t worried that this was anything more serious than stress related palpitations.

After a routine trip into hospital to have four wisdom teeth removed under a general anaesthetic, the nurses told me they had trouble stabilising my heart rhythm when I was in recovery. Once back in my hospital room, I was advised to see a cardiologist to ensure that everything was fine. 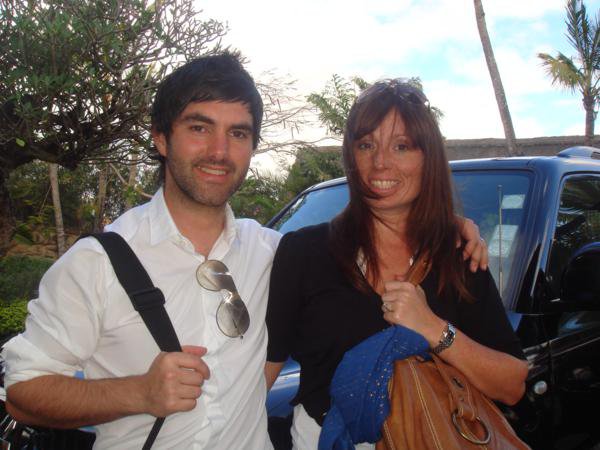 Again I wasn’t too concerned but thought I would mention it to my doctor when I was fully recovered.  The next evening I was home, in bed recuperating when my heart started to behave very strangely. It began flipping, jumping, and felt like it was falling over itself. A strange way to describe it but it’s how it felt. It would flip and felt like it was stalling. I felt dizzy, sick, scared, as if I was going to fall unconscious. I rang the emergency medical line and they told me to call for an ambulance who took me straight into hospital. From there they referred me to a cardiologist who over a period of weeks carried out a series of tests; a stress test, ECHO an MRI of my heart and I had to wear a 24 hour Holter monitor etc.

The results were in – the good news was that structurally my heart was fine, but the holter monitor found something. It was a run of tachycardia around 250bpm – it was then that I received the diagnosis of right ventricle outflow tract ventricular tachycardia (RVOT–VT), a benign heart arrhythmia, although sometimes frightening for the sufferer. I was sent home and told to see how things go and to try beta-blockers.

For some people beta-blockers are great and work wonders, but they made me feel dreadful, tired and depressed so I came off them. As time progressed the symptoms got worse and having felt like I’d exhausted all routes of medical help in my local area I went online and came across the London Bridge Hospital website and from there contacted an electrophysiologist who felt confident that they could help me.

After my consultation and more tests, my first ablation was booked. I’d read up a little about what was involved but I can still remember shaking when I was getting ready in the hospital room. All kinds of things were running through my head; will it be painful, will I survive, what if it doesn’t work, how long will it take?

I was given a huge gown to wear, one that has loads of pockets that can be pumped full of warm air to keep you comfortable when you’re in theatre. I looked pretty funny and my husband and I were joking about it, he even took a picture of my theatre outfit!

As I walked down to theatre I remember thinking I hope this is the end of all the problems and that my life will return to normal. I couldn’t believe that my quality of life had changed so much in such a short space of time. RVOT-VT had meant I was no longer able to run or exercise without feeling utterly drained and ill afterwards. My arrhythmia was daily and left me feeling weak, ill and unable to concentrate on anything. I had chest pains and sleeping had become a problem too. I couldn’t sleep on my left side and would suddenly wake gasping for air. So, despite my fears of going into theatre I focused on my future, one that would allow me to go on to start a family without being plagued with these symptoms.

Everyone involved in the procedure were amazing. They helped me onto the theatre bed and began attaching the leads, which they use to monitor your heart throughout the procedure. I was warm and comfortable. They gave me a sedative to relax me and I actually fell asleep a few times during the procedure. I also had an oxygen mask.

They made an incision in my right groin into the femoral artery which is how they get the wires up into the heart chamber. I didn’t feel any pain. They would stimulate the heart with electrical current so they could see the problematic areas on the monitor and know where to ablate. I could feel some pressure in my chest when they were stimulating the heart but after some more sedative I drifted off to sleep.

Two and half hours later I was back in the hospital room and was elated that it was all over.

After about eight months it became apparent that my particular RVOT-VT would require a second ablation. So I was back in hospital again and this time the procedure took over four hours. I don’t remember this one as I was blissfully sleeping throughout, but was told afterwards that there were multiple sites that needed treatment. Recovery from ablation is very quick. I stayed in hospital overnight to ensure that my heart was happy and that the incision in the femoral artery had closed. The next day you’re home and on your way to a feeling better. I took a few weeks off work to rest.

It’s been over a year now since my last ablation and I’m very pleased with the results. My heart is so much better. It’s been a long emotional journey, not just for me but for my entire family. I’m due to have a check-up in the next two weeks but I feel confident about the future and know that I shouldn’t be frightened of this condition. I’m looking forward to starting a family and living a healthy happy life.