My journey with ARVC by Gavin Boyce

My journey with ARVC started on January 16th 2012 when I woke up in hospital to see a nurse looking back at me trying to offer me some reassuring words. She said I was in hospital and that there was a lot to explain, she was going to call my wife to let her know that I had come around. I laid back and waited for the answers.

8 days earlier, a month before my 31st birthday I was training with a friend for our third London Marathon, we had planned a quick 5k run as part of our training. Shortly into this run, I felt dizzy, collapsed and went into cardiac arrest. My friend Colin barely had time to check what was wrong when two police officers (Ed & Jess) who were driving to work stopped to see what was wrong and to help. They quickly realised that I wasn’t breathing and began CPR, they kept on with the chest compressions until two ambulances arrived with defibrillators. I was shocked twice on the side of the road, twice in the ambulance and I think once in the hospital by the resus team. They managed to stabilise me and I was then put into an induced coma.

The initial recovery from what had happened was really hard. I was told I’d probably be in hospital for a few months whilst I recovered. Now I know not many people like hospitals but I really dislike them and had to work hard to get out of there as quickly as possible. Initially the docs didn’t know what had happened but I was still too poorly to test. I still had tubes in my throat and had to communicate with an alphabet board. Just pointing to the letters to spells words. Once the tubes were all out I then had to build up the strength in my legs to start walking again. After about 2 weeks of not using them there had been some muscle wastage so that was really tough but moving up and down the corridor of the ICU unit with my Zimmer frame was amazing. Doctors and Nurses who hadn’t seen me since they’d played a part in saving my life stopped to say how shocked they were at my speedy recovery and to encourage me to keep up the good work.

I was now strong enough to undergo various tests to establish what had happened. To be honest before that I was just concentrating on being fit enough to go home and believed I was close, so receiving the ARVC diagnosis hit me for six. An incurable condition that can result in sudden death! I was devastated. I didn’t want to accept the diagnosis or the recommendation to have the ICD implanted but eventually woke up to the reality of it all and relented.

2 days after the ICD was implanted, just 3.5 weeks after I’d collapsed I was allowed home. I think by then the docs were just happy to not have to listen to me begging to be released. I was still really, really weak but I knew I could get stronger at home. It took longer than I wanted but I was strong enough to return to work within 3 months – by then I was going a bit stir crazy and just wanted to be back to “normal”. Doctors, Nurses and my cardiologists were all amazed at how quickly I’d got back on my feet. 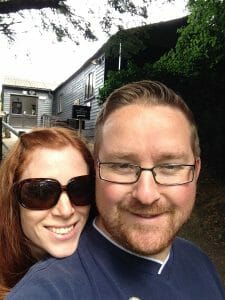 It’s now been almost 6 years, living with ARVC is tough at times and there are some drastic lifestyle changes to be made. Things like caffeine and strenuous exercise can trigger bad heart rhythms and so I had to give up those strong morning coffees, running, football & squash but I still do a lot of walking, I can swim and still play golf so that helps.  The mental and emotional impact is huge, you look normal on the outside but have a machine attached to your heart that can deliver a huge shock at any moment to prevent sudden death – I’m sure that’s enough to give anyone anxiety issues. There are times when I want to absorb as much information about the condition as possible, raise awareness of it, or fundraise for various charities like CRY or to purchase a defibrillator for a local school but there are also times I can’t stand to think about it and just want to forget about it and be “normal”.

All in all, I know I am very lucky to still be here, to see my young children grow up and to cherish every memory made with them. I’ve been told that there is something like a 3% chance of surviving an out of hospital cardiac arrest and I give thanks every day to all the people involved in saving my life that day and who have helped look after me ever since. As my amazing wife said to me before I went in for my ICD operation “ARVC is not bigger than you and will not define you. Life will be as good as its always been, just a little different!”