I have been suffering from SVT attacks since March 2010 when I suddenly collapsed at work.  I was taken to A&E for tests, my heart rate was very high reaching over 200BPM, I remember being very scared as I was never in hospital and was always fit and healthy.  They gave me a 6mg jag of adenosine and it slowed my heart rate back down.  I was told this can happen at any time as I have an extra pathway in which produces a rapid heart rate (arrhythmia) when the blood is trying to get around the abnormal pathway.  There aren’t any symptoms except the palpitations can be very uncomfortable, cause chest pain and tightness as well as becoming lightheaded, you may even blackout.  They do occur unpredictably and when you least except them in the middle of the night for example.  You may be able to control them with techniques, I used to try going for a cold shower or put a cold washcloth around my neck and I have also tried holding my breath for a few seconds to help slow the heart rate down.  Sometimes this isn’t always effective and I have to go to my local A&E Department to get an injection of adenosine which returns your heart beat to normal. 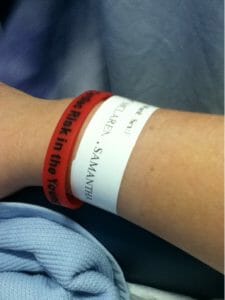 After my first SVT attack, I was frightened and unaware of what was happening to my body, I immediately googled the problem and got linked up to the Cardiac Risk In the Young (CRY) site. I registered with them and they sent me out some leaflets and books explaining everything, straight away I felt relieved that it wasn’t just me going through this and there are other people to share these experiences with.  Both myself and my family can’t thank Cry enough for their support throughout my journey.

The tests carried out on me during my journey with SVT were:

Following all of the above procedures and tests carried out over the years I still suffered from Occasional SVT attacks and needed something to prevent this.  I was told I could get an “Ablation” operation, which would burn out the abnormal pathway to my heart.  At the thought of it I said no straight away and put it to the back of mind.  As I began to get more and more SVT attacks due to stress and anxiety, after a few years I decided I had enough suffering and should get the operation as it would help me and give me a better lease of life.

I received the phone call on the 19th of February 2013, I was told there was a cancellation for 7.30am the following day. I was in work and couldn’t believe it was finally going to happen.  I was in shock and excited at the same time, while another part of me was terrified, I had to convince myself I would be fine, this would be life changing!

The following morning my Boss drove me and my mum to the hospital, the Golden Jubilee National Hospital in Glasgow,  I was shown to my own room in the cardiac day unit and given my gown, where I prepared myself for the op.  One of the nurses came in to take blood, when I started crying uncontrollably and realised this was all happening, very fast, as I felt uneasy and scared.

Professor Rankin who was doing my procedure came into my room with his team and tried to relax me.  They all introduced themselves to me and were very nice and friendly.  He talked me through everything and reassured me I would be fine.  I felt more secure, stopped crying and told myself it would all be over soon and I would have a better quality of life.

As I walked to the theatre room I wasn’t scared but curious to all the tools and needles, I was a bit teary again and there were so many nurses around me to attach leads, which are used to monitor my heart and to make me comfortable.  They gave me a little sedation and I was still anxious and upset so I was given more.  I could feel more relaxed and stopped crying, I was awake during the whole procedure which lasted around 2 hours.  Throughout I could only feel the Doctors pressing at my groin where surgery was taken place.  I could hear them taking about what they were doing and every time I tried to sit up to look they kept telling me to lie flat and stay still.  I think it was just an automatic reaction to see what they were doing.  They made an incision to my right groin into the femoral artery which is how they get the wires up into the heart chamber.  They stimulated my heart with an electric current so they could vision my problem area on the monitor and know where to ablate.

Once the procedure was over I was lifted off the table onto my bed back to my room and told to try and get some sleep for a few hours.   I felt very unsettled and a bit groggy.  I was in denial that I couldn’t move and thought I would be able to go to the toilet and get ready to go home after I woke up.  As I tried to sit up I told my mum I couldn’t move and I couldn’t feel my legs, I panicked but my nurse who was looking after me, Jacqui insisted it was just the drugs wearing off and I shouldn’t worry.  After I woke up the second time I still couldn’t move and was told to stay in bed as long as possible.  I was given some aspirin to help with blood clots and some paracetamol to help with the pain.

After my ablation I was advised to take a week off work for full recovery as any heavy lifting or stretching may cause my wound to burst.  I had a lot of bruising at my groin and some internal bruising which caused me more pain at my groin and my thigh.

If anyone is told to have an ablation I advise they get it as soon as they can and not wait like I did, there is nothing to be afraid of! I’m so glad I went through with the operation and haven’t had any problems since and it’s now 2017! 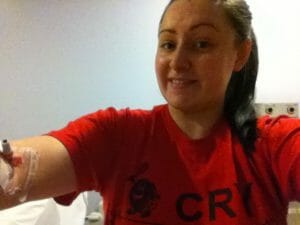 I’m now looking forward to a great future all thanks to CRY!