After years of struggling with heart grumbles, pains and palpitations, i was repeatedly told (by different doctors) that it would just be stress, anxiety and depression. Different medications did nothing to stop the aforementioned issues I experienced. The symptoms also got so much worse after my Mum passed away in 2018 but this was again put down to stress, anxiety and depression.

By pure luck (in a sense) I got tonsillitis which i get often and was given antibiotics by the doctors. I am allergic to penicillin so getting antibiotics that work for me is always tricky and I was actually given some that didn’t agree with me at all. I spent a night in absolute agony unable to sleep with stomach pains, a burning sensation in my spine and more.

In the morning, my dad and sister insisted and dragged me to the hospital (I didn’t want to go at all as I don’t do well with medical things, especially needles and I knew I’d need to give blood to help them find what was wrong with me).

So, against my choice I went to hospital and was immediately admitted, they thought my pancreas appendix had burst due to the nature of the pain. I was given a full MOT: multiple scans of everything, CT scans, the works. One of the procedures was an ECG.

The results came back as just an allergic reaction to the antibiotics. But then I was told privately by a doctor they had detected WPW.

I was completely shocked! I thought I was a healthy young lad. At first it didn’t really sink in at all despite a very brief explanation from the doctors that it could be medicated or treated.

He said that due to it being undetected for so so long, the stress on my heart will have been so much and therefore medication was no longer an option. And that surgery was the best option as soon as possible or I, and I quote “Might not make it to 35”

Obviously, I was talked through the list of risks involved.

I left the specialist’s office and I’m not ashamed to admit I broke down into tears. And genuinely spent the next two weeks very closed up as a person. Just in shock.
Obviously, I came to terms with it and was determined that I was going to beat it.

It was a long 8 months wait to get a surgery date and when I finally got the letter in January, I was relieved but also scared again, still knowing the risks that accompany the surgery however minimal the statistics.

With around a week or two to go, to the surgery, I went back into my shell a bit again. Really scared about everything that could happen. To the point in a way I was almost making peace with my life, thankful for what I’ve managed to do in my life so far- I’ve backpacked around the world, lived in Spain for two years and kept going after the passing of my mother, so I was proud of myself. (Might sound dramatic but I couldn’t help the way I felt at the time)
My family, friends and colleagues were all amazing and supportive, trying to keep me positive and reassure me.

The day of the surgery arrived and I was obviously incredibly scared. Hugging my Dad before going into the ward wondering if it’s the last.
The doctors, nurses and surgeon (All the staff really) at Wythenshawe Hospital were absolutely amazing!
Really really kind and understanding (especially as it took a shocking amount of time to talk me into getting the cannula in), as I said I really don’t do well round needles.
The surgeon, Dr Brown was incredible, he talked me through everything: kept me calm and discussed options with me such as how much risk they take, i.e. if it looks like it could be more complicated than it seems, does he carry on or does he stop and they have a few more assessments and re plan, and gave me three options to deal with the potential levels of risk and listing the figures relating to said risk i.e. a stroke being caused or a heart puncture.

I signed the waiver and simply told Dr Brown “you’re a lot smarter than me, I trust your judgement completely, do what you can to fix me as safely as you can.”
The surgery was supposed to take 2 hours max, and ended up being 4 as Dr Brown found extra pathways which he judged in a safe enough position to ablate, though I do remember him vaguely talking to me when I was awake on the operating table saying he believes its a safe call to ablate and tried to check I was happy.

Now, I feel so much better than I ever did. Maybe it’s also a slight pseudo effect as I’m still waiting for my sign-off from Dr Brown. It’s taken longer to heal than I thought because of the extra work that was done to ablate the extra pathway and as boring as 4 weeks bed rest was, I didn’t mind a small break from work, haha!

I am though feeling a lot better, a lot of the healing symptoms have passed (during healing I still felt palpitations and flutters etc but these are becoming very minimal now).

I’ve felt healthy enough recently to rejoin the gym and start regaining full fitness which I intend to keep up to ensure a healthy life. I’m obviously doing this walk* not only as a challenge and to help raise money for CRY, but to raise awareness so hopefully others can catch it earlier and not have to have surgery and the stress and anxiety that comes with it.

I thank all my friends and family and especially all the staff, nurses, doctors and of course Dr Brown so so much for everything they have done. Words can’t actually describe how thankful I am to all of them, they’ve helped give me the chance of happy long life.

*To mark the first anniversary of his initial diagnosis, on Saturday 18th June, Tom will be joined by best friends Rochelle Antley and Billy Clements (plus many other supporters they hope to pick up en route!) as they kick off the Heart 2 Heart Fundraising Walk, completing 20 miles from Edgeley Park, to Old Trafford, over to the Etihad, and back to Edgeley Park. 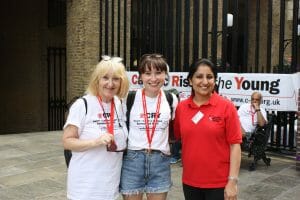