myheart member, Joseph Tanner, talks about his experience of taking part in the Brighton Marathon, 2015 below.

This story begins on Sunday 16 March 2008; I entered the Hastings Half Marathon. The week before the half marathon I had a cold, and at the time I didn’t think much of it. On race-day I felt all right, although I texted a number of people saying something wasn’t right, and that I would text them after the race.

I never sent that text because that day my life changed; I collapsed at the finish line and had a cardiac arrest. If you think about it, running saved my life. I have a condition where it is common to die in my sleep. My condition decided to show itself on a day that I was running, a day that defibrillators were at hand and I could be saved – so, yeah, running saved my life.

I was then diagnosed with a heart condition called Brugada syndrome, and doctors/cardiologists/specialists said that I would never run a marathon again. It was tough to take in, the idea of not running again, even though I came away with my life. I wouldn’t run again until 2010 when, after some support from the myheart crew, I finally found the courage to put on my running shoes again.

It did take a lot of courage to put my running shoes on. I had a cardiac arrest whilst running and I feared it would happen again, that is a hard hurdle to climb over! I never knew how far I should or could run; no-one would/could give me those answers. My burning desire to run another marathon returned in 2014 when I volunteered to cheer on CRY runners during the Brighton Marathon.

So with my mind made up I decided to sign up for the Brighton Marathon. I was honest when filling out the application, a part of me wanted them to refuse me entry for the marathon.

Saturday 11 April 2015 – a night that I won’t ever forget – the night before the Brighton Marathon. I am being very generous saying that I had three hours’ sleep the night before. I had run many miles before the marathon day, but I did have a fear that this would really be my last run. I felt bad because my sister was pregnant at the time and I felt that maybe I was being selfish. I also had my parents in a tailspin not wanting me to run this marathon. I had to do this for myself, though I really wasn’t sure what I was trying to prove. That night I talked myself out of running a million times, and yet I laid in my bed until my alarm went off – though I really didn’t need it! I walked to Preston Park, the starting point of the Brighton Marathon, en-route passing so many people that were on the same path as me, yet on a very different journey.

At Preston Park I waited around anxiously until the race started, then I lined up with all the other runners, my nerves building up more than ever. It was just the waiting – once I started running I knew I would be fine. I had felt fine all the time – tired due to lack of sleep – but fine. 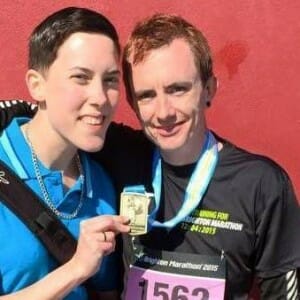 I loved every single minute of running, through the city that I love, the place that I now call home. What also felt good was all the people that I was overtaking, damn that competitive side came out of me! I was doing a good time; my friend Charlie informed me that at one point it looked like I would finish in 3hrs 45mins.

Around the 17/18-mile mark I started thinking to myself, I’m going to get around this course without hitting the wall. Sadly, I got a bit ahead of myself, even before the race I had a mental barrier of 18 miles because that is all I had done in training. At the 19-mile mark my legs gave in and I had to start walking, I text Charlie to let her know, from this point forward I would walk five minutes and then run five minutes. The five-minute runs felt like the longest run in the world, and the walking time went far too quickly! 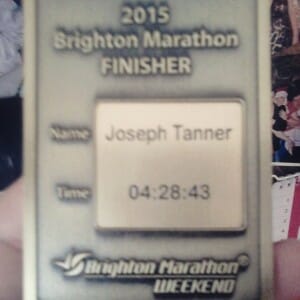 I would have never been able to run a marathon again if it wasn’t for all the support I received from myheart members that I met through CRY.