Sunday 16th March 2008, I had a cardiac arrest and died for 7 minutes. I collapsed at the finishing line of the Hastings half marathon. 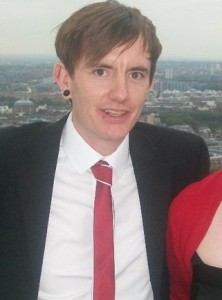 I had no clue that I had an undiagnosed heart condition, I always considered myself a healthy person.

Before this fateful day, I would run roughly 20+ miles a week and I had completed the London Marathon in 2007.

I’m thankful that this condition showed itself on this day, at an event where defibrillators were at hand. It scares me, to think that this could have happened to me at any time, people with my condition commonly die in their sleep.

On that Sunday, I was picked up in Hove by others runners I had met through my running group. We all arranged to meet after the race for a lift home. I remember the day being very cloudy and wet.

Before the race I texted 5 of my friends to say that I wasn’t feeling right and to wish me luck. I don’t even remember sending that message, I don’t remember feeling queer!

I woke up in hospital on Wednesday, I had been in intensive care for 2 days.

I remember coming out of intensive care, feeling like I was waking up in a horror film. Everything was explained to me, what happened but I don’t think I ever really took it in, maybe it was the shock that I was lucky to be alive.

There were no white lights,

Nor did I fall upon the burning pits of hell.

My life didn’t flash upon my eyes,

Nor did I rekindle those moments I desired!

I did not feel my soul leave my body,

To look down upon my lifeless body.

When they brought me back,

I didn’t feel my lungs fill with air,

Nor do I remember my first breath.

For days I laid in intensive care,

Those days were a dreamy haze.

My family sit around my bedside,

All teary eyed, they nearly lost their boy!

Naked as the day I was born

Wired to the elevens,

This is no heaven!

A shock to the system the day I died,

I don’t remember running, my body must have gone into-auto pilot, getting me to the finish line in 1 hour 49 minutes. Once I collapsed St John Ambulance went into action, they realised I was going into cardiac arrest so they shocked me with defibrillators. I was also told that I had another attack while I was in the ambulance on route to hospital. My family was phoned, the police visited my work place and told my manager to expect the worst.

After having an MRI scan at Brompton Road I was diagnosed with Brugada syndrome. It had already been decided that I was going to have an implantable cardioverter defibrillator (ICD) inserted but had to wait on the MRI before getting the go ahead.

I took everything in my stride, which seemed to surprise a few people. I looked at it that I was lucky to still be here, so I was like “do what you have to do”.

On the day of my operation, I couldn’t think straight. I had to sign permission for the operation, for the very small possibility that I could die under this procedure. I think that scared me the most, the thought of dying; I showered twice to make sure I was clean. When I was taken down to theatre, I laid down on the operating table, I was so scared that a solitary tear rolled down my cheek. I remember a nurse asking me if I was okay, I lied ‘cause in truth if I had option I would have ran out of that theatre.

Four hours later I woke up in my hospital bed, with a room full of friends, it meant the world to me to be surrounded by so many friends. The next day I was released from hospital, after 3 weeks I was so happy to be out. I was told to take it easy, but on the day of release I was out walking along the beach. A week and half later I was back at work, I wasn’t allowed to do any lifting or climb ladders – among many other things – for about 6 weeks.

Watch Joseph talk about his experience of having an ICD fitted below.

Life is pretty much back to normal for me now, sometimes I even forget that I have an ICD – though it looks like a bar of soap under my skin. I found out about CRY by chance. I wrote many blogs about my experience on Facebook and Myspace and a mother who lost her son to a cardiac arrest contacted me after reading one of my blogs – she told me about CRY and all their work. So I checked out the CRY website, contacted them via email, chatted to Alison a few times, told my story and the rest is history.

I’ll continue to raise awareness through CRY and help give support to people that need it.

It took me over a year to put back on my running shoes, I was finally able to find the courage after attending a couple of myheart meetings.