It’s every parent’s worst nightmare, being told that your apparently fit, healthy teenager has a heart condition that could potentially kill him and that he may have to give up the sport he loves.

That was the news that hit Kerry Preece from Shrewsbury like “being slapped in the face” when her 18-year-old old son, Aron (a talented swimmer who was already competing at national level), was diagnosed with a condition known as Wolff-Parkinson-White syndrome (or WPW) having attended a free heart screening organised  by CRY.

WPW is a problem with the electrical “connections” in the heart. It causes a very rapid heart rate which in some cases can lead to a dangerous and possibly fatal arrhythmia. However, sufferers will often not be aware of any obvious symptoms.

Following Aron’s successful treatment (and return to swimming!) Mrs Preece wants other young people to understand the importance of booking in for a simple screening test with CRY – and is urging other parents to go to our www.testmyheart.org.uk website during Heart Month 2019.

Kerry says: “Like most parents who drag their children along to a heart test on a Saturday morning, with both protesting that ‘there’s nothing wrong’, I never imagined the Doctor would call me in to explain he’d found something abnormal on Aron’s ECG and that, until he’d been referred for treatment, he’d have to give up his passion in life – swimming. I admit, I burst into tears and felt completely in shock. But CRY couldn’t have been more supportive, directing us in our treatment journey. We even stayed in touch with the Doctor who identified Aron’s problem on that day back in June 2017.”

Aron was treated 11 days after his diagnosis by the Cardiologist, Dr Adrian Morley-Davies, at University Hospitals of North Midlands, who Kerry describes as “phenomenal”.

We know that every week in the UK around 12 young people (under the age of 35) die suddenly from a previously undiagnosed heart condition. 80% of these deaths will occur with no prior symptoms, which highlights, as in Aron’s case, why screening is so vitally important.

Sport itself does not actually cause sudden cardiac death but it can significantly increase a young person’s risk if they have an underlying condition. And, although screening won’t identify all young people at risk, in Italy, where screening is mandatory for all young people engaged in organised sport, they have reduced the incidence of young sudden cardiac death by 89%.

Kerry had taken Aron and his younger sister Anya (aged 14 at the time) to a CRY screening day at Wrekin College funded by the Matthew Dewhirst Memorial Fund.

Matthew (whose parents, Chris and Sue, live in St Martins, Oswestry) tragically died in July 2012 from a previously undiagnosed heart condition. He was aged just 17. Matthew was an incredibly sporty and popular student at Ellesmere College with a passion for rugby and his sudden death, following a training session, sent shockwaves throughout the local community.

Since Matthew’s death, Sue and Chris (with huge support from family and friends) have campaigned tirelessly to raise awareness of young sudden cardiac death and CRY’s work, raising over £150,000 to date which has led to the screening of around 2,300 young people already. Sue has also become a regional Representative for CRY.

Kerry adds: “Everyone involved with Aron’s swimming club at Wrekin College was incredibly supportive – as was our entire swimming ‘community’ – following his diagnosis and subsequent treatment using a procedure known as ablation.

“Sue Dewhirst came to meet me and other parents at one of our galas and she gave a very inspiring and emotional speech. I continued to organise fundraising events at Shropshire County Swimming galas, to support further CRY screenings in memory of Matthew. Aron and I were honoured to meet up with Sue again last summer so Aron could personally present a cheque for £1,500.”

We recently carried out a UK survey among 2,001 adults between 18th-22nd October 2018 which helped highlight the demand for screening. Around two-thirds of people (62%) are aware that an ECG could detect the majority of conditions which can lead to young sudden cardiac death. And, of the 18-34 age group questioned, over two-thirds (67%) of men and 71% of women said they would like “the opportunity to book in for cardiac screening (with an ECG) before reaching the age of 35”.

CRY Chief Executive Dr Steven Cox says: “Aron’s story is becoming more and more common as we test increasing numbers of young people – with apparently no symptoms, no obvious family history or warning signs. It’s fantastic news that Aron was treated successfully and is now back to swimming at a competitive level and enjoying his first year at university, safe in the knowledge that his heart condition has been treated.

“CRY wants every young person to have the opportunity to have their heart checked and last year we tested almost 30,000 young people. 1 in 300 people we test will have a potentially life-threatening condition identified and research we published last year showed that of those athletes identified with conditions 75% of them returned to competitive sport after being treated.

“We would like to thank Kerry for speaking out publicly about their experience and helping to promote the message that a diagnosis of a heart condition during adolescence does not mean the end of your dreams or pursuing your passions. With treatment or even lifestyle changes, you can continue to lead a normal, active life and like Aron, become an advocate of screening and the importance of the ECG test.” 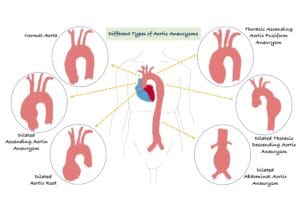 What is aortic disease? The aorta is the largest tube (artery) that carries blood cells containing oxygen around the body to your

Every year, KCL Tennis hosts a tournament with the aim of raising money for a chosen charitable organisation. This year, we chose