Lucy Challis wrote her story to be included in the myheart booklet which was launched in November, 2013. 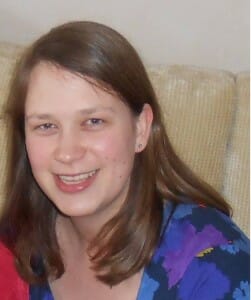 On Sunday 29th January 2006, my older brother Stuart, age 25, collapsed and died playing football. I was 23 and my other brother was 27. Stuart was the fittest of the three of us. He had no symptoms. His post-mortem, confirmed by the CRY Centre for Cardiac Pathology, identified arrhythmogenic right ventricular cardiomyopathy (ARVC). Our GP explained the genetic implications and the importance of screening. I think the shock of Stuart’s death meant that we didn’t really take in what being screened meant – it was just another hurdle to overcome. On a Monday in April, my parents, brother and I had ECGs and echocardiograms. The doctor asked if anyone had experienced possible symptoms and when I mentioned I had fainted on a horse at 15, the look on his face got me thinking. By the time he had studied the results of the tests, I’d come to expect the answer – he thought I had ARVC too. In comparison to Stuart’s death, I almost felt like this was nothing – at least I was still alive.

Two days later I was referred to The Heart Hospital and took my overnight bag, I was so convinced I would be admitted. A specialist nurse questioned me prior to retesting, which included an exercise test. Suspicions of ARVC triggered an MRI scan, a 24-hour Holter monitor and the offer of genetic testing, with a 50% chance of finding the gene. The diagnosis was confirmed, with the MRI indicating mild left-ventricular involvement and I was started on medication to control my irregular heart rhythm and offered an implantable cardioverter defibrillator (ICD), which I immediately agreed to. There was just no question of me putting my family through the possible heartbreak of losing another child. I’m a practical kind of girl and like to just get on with things. I was lucky not to be hugely sporty so didn’t have to make many life changes; I was still permitted to continue horse riding and only exclude mad cross-country gallops! The hardest thing was dealing with other people – some wanted to wrap me up in cotton wool and not let me lift a finger, others found it difficult to accept I was actually suffering from a potentially life-threatening condition as I had no outward signs.

My ICD was fitted in May 2006 and I think Mum was more nervous than me! I don’t tend to worry about these things, so the day just kind of happened. I was nil-by-mouth from midnight, so frustratingly I could not eat or drink and needed to occupy myself until 4pm because I was last on the list! I hadn’t wanted to see an ICD before it was put in, but a rep from the ICD company was chatting to me in the lab prior to surgery and offered me a demonstration model to show the children when she learnt I was a teacher. She put it in my hand there and then – not exactly the ideal time just before I was about to have one put in me! My ICD was implanted under sedative and local anaesthetic and within half an hour of returning to the ward I was starving and demanding food. My left shoulder, arm and side were so stiff and sore my husband had to cut everything up and feed me, but otherwise I felt fine. It was odd knowing there was something metal inside me that I couldn’t feel unless I moved. After a relatively comfortable night, I was allowed home.

Having to take 10 days off work was disappointing but I needed stronger painkillers than I was given. You don’t realise what muscles you use until you can’t use them. Standing, sitting up and sitting down, were challenging. I couldn’t lie on my side, so had 2 weeks being propped up on cushions to help me sleep. My wound needed to be kept dry for 1 week and I couldn’t lift my arm above my head for 6 weeks. I found it difficult to wash my hair one handed! I’m a primary school teacher, so had to be careful lifting heavy piles of books, writing on the board and teaching PE and Games for a while after returning to work. I have always felt comfortable talking about my condition and was open with my class about my ICD. I wanted them to know what was going on and that it was fine to question me. The best bit was when they asked if they had to plug me in to recharge me! Being around kids is great because they soon forget about it all and just treat you like they always have. They looked after me and carried my things around for as long as I could get away with it!

Genetic testing on Stuart’s tissue showed one gene each from Mum and Dad combined to be responsible – a million to one chance. Mum, Dad and my brother carry one gene each, unlike me and Stuart who had both. They are regularly checked and take medication as a precaution. Learning the whole family were affected was a shock, but at least we know. Some relatives have had ECGs which appear normal. Some have chosen not to be tested which I struggle to understand, but this option is always available. None have had genetic testing. After months of upheaval our family settled into a more routine existence as we learnt to live life without Stuart. Memories became happy rather than sad and 8 years later his name is mentioned without tears, on most occasions.

The first time my ICD fired was August 2007 when I was horse riding – thankfully I didn’t fall off! I was retested and an ‘inappropriate shock’ was confirmed – it shouldn’t have fired. My medication was increased and once I got over the shock (literally!) it was a funny story to tell! In March 2008, my ICD fired again. This time checks confirmed it had fired appropriately; my heart reached 220 beats per minute and my ICD charged and fired within 7 seconds. It was odd thinking that without my ICD I could have been in serious difficulty, but I felt it had done what it was meant to do – save my life. Neither shock was pleasant, but within 2 minutes of each I felt so well it was almost unbelievable it had gone off at all. I was slightly cautious for the next couple of weeks, feeling conscious of everything my heart was doing, but that worry faded and I just got on with things. Most annoying was not being able to drive for six months but my lovely friend who lives close by chauffeured me for those months which was an absolute godsend. Weekends were OK as other people were around, but my six months spanned the summer holidays and there’s nothing more frustrating than being deprived of your freedom and becoming dependent on others.

My ICD was replaced in September 2011 and there have been no further episodes. My family and husband, thankfully, don’t treat me with kid gloves, although I’m sure they worry every time I go horse riding or on school residential activity weeks. My recent pregnancy put my heart under more strain but I had brilliant care and my 12 week check up indicated my heart seems to have coped well.

ARVC is a genetic condition and I have 2 faulty genes, so realise my children could be affected. However, this has not put me off having them as they can have gene testing to remove any doubts. Not having to make huge lifestyle changes has helped; if I had been severely affected I could have felt differently, but having our little boy in our life is certainly the best thing that’s ever happened to us.

I understand why some think young people can’t cope with being diagnosed, but my experience from the last 8 years has taught me that children have terrific reserves of resilience, adaptability and acceptance and it is important for young people to have the chance of a diagnosis. If Stuart had been screened and diagnosed with ARVC then it might have stopped him playing competitive football, meant adjustments to his social life and possibly an ICD, but he would probably still be alive. Some might find having a heart condition difficult to accept and struggle to cope but others will acknowledge their limitations and move on. For those who think young people can’t cope, I ask this – is it better to know and live, or not know and die?