Sian Donnelly wrote her story to be included in the myheart booklet which was launched in November, 2013. 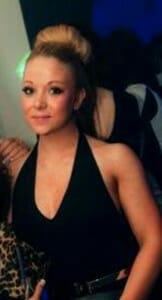 Whilst on a family holiday in 2004, my brother Adam died suddenly whilst playing volleyball at our hotel. After two post-mortems we were told that he had died from SADS (sudden adult death syndrome). At the time, we were completely unaware of any heart conditions in our family and by chance came across CRY who said we should be screened.

After a day of tests by the CRY team in 2009, Mum was diagnosed with the hereditary heart condition Brugada syndrome. Not only did this give an answer to my brother’s death but it allowed us to test the rest of the family, revealing that my aunt and grandmother have the same condition. This, ultimately, has prevented any more distress to my family. We also chose to have genetic testing which was inconclusive – no Brugada gene was found.

At 18, a year after my mum was diagnosed, I learnt that I too had inherited the same heart condition. It’s scary thinking about this at such a young age, but knowing I have a 50/50 chance of passing this on has not put me off having children in the future. We can test early to confirm if the condition has been inherited and if so I know first-hand how to deal with the diagnosis and possible surgery.

I never felt nervous during testing as I was convinced I didn’t have the hereditary heart condition. I had been tested annually for 5 years before I was diagnosed, so felt there was no reason to worry. The only time I became concerned was when I first had the ajmaline test and it made me extremely unwell because I am so small, therefore it could not be completed. Knowing that I would have to have the test again was pretty frightening but it was the only way the hospital could rule out Brugada. Even though all my ECGs and ECHO results were fine, the ajmaline test showed I had the condition. One of the well known facts about Brugada syndrome is that it can be extremely difficult to detect.

My first reaction was to cry. All my test results were ‘normal’ so it was a big shock. I went into auto-pilot, numbly listening to everything the doctor said. I was offered three options: lifestyle change, a medical procedure that would test the ‘strength’ of my heart or an ICD. I was not prepared to constantly worry about the daily things I was doing in case it would lead to a fatal cardiac arrest and I knew I did not want this change hanging over my head. Next option was a medical procedure testing the strength of my heart and how prone I was to having a cardiac arrest. However, it would involve risky surgery and if I was found to be at high risk I would have to have an ICD fitted anyway. So my only option left was to have an ICD fitted – a very quick and easy decision to make.

My operation was in June 2010 at St George’s Hospital, Tooting – less than 2 months after being diagnosed. I was nervous the morning of my surgery, but knew I was in the best place should anything go wrong! Although initial tests indicated the surgery had been successful and I was sent home, the next evening my ICD initiated three consecutive shocks. This was extremely scary – being less than 24 hours since my operation – and also very painful. I often get asked by other people with ICDs what the pain of a shock feels like and to be brutally honest, it felt like someone had kicked me extremely hard in the chest.

Mum phoned St. George’s who advised us to go immediately to our local A&E, but they didn’t understand the seriousness of the situation and the lady on reception didn’t even know what an ICD was! I sat and waited whilst a man with a sore thumb was called in before me! My parents and I then decided to drive to St George’s about 45 minutes away. Once there I was rushed straight into the resuscitation unit and they found the wire had dislodged and instead of looping from the ICD to my heart, it was in an ‘S’ shape at the bottom of my abdomen. After a sedated night in the Coronary Care Unit, panicking that my ICD would shock again before they were able to replace the faulty wire, they operated successfully.

I suffered panic attacks for a long while after these problems, concerned that it would happen again. During surgery my ICD was fitted this time underneath the muscles below my collar bone instead of directly under the skin – something my consultant suggested so the ICD would protrude less. Although thankful you can hardly see it, I was unable to move my left arm at all for almost a month because my muscles had been cut and it was extremely painful trying! I was signed off work for three months, but after 6 weeks felt ready to return to my routine and was pleased to be back driving 2 months later. As time went by I relaxed more and more and now feel completely at ease with the fact I have an ICD.

When I was first diagnosed, my parents were as worried and anxious as I was about the operation and also had reservations about how I would cope with my scar and generally manage having an ICD fitted. As an 18 year old girl, I loved going out and they thought I might become self-conscious about my scar but luckily that never happened. Although it is noticeable and considerably bigger due to the second operation, mostly I forget it’s there until someone points it out!! We all feel that a little weight has been lifted knowing that should I have a cardiac arrest, my chances of this being fatal have been dramatically reduced.

I do not believe having my ICD fitted has changed my life in any way – if anything, it’s made me more determined to live my life to the full. I love going to the gym and going out with my friends and I also had the chance to live in Ibiza for a few months.

Many people I have met since my operation don’t know anything about it and wouldn’t suspect that I have a heart condition. I often don’t tell people about my ICD or why I need it because of the circumstances surrounding my diagnosis. I’m not one for sympathy and feel that quite often people treat me differently when they find out. Although my closest friends know, I’m sure a few of my other friends would be shocked to learn that my brother passed away and that I have the same condition! I was given a magnet after my surgery. I always make sure I have it on me, as should there be a fault with my ICD and I am still conscious while it is delivering shocks, I can temporarily deactivate it by holding my magnet over my ICD site. My friends are aware that if I am unconscious they are not to use my magnet as this could end up doing more damage than good. They also understand the precautions I have to take, for instance, at airports or going into clubs they will always go ahead and discreetly inform security that I cannot go through metal detectors. I always make sure that at least one person I am with knows what to do, but thankfully it has never come to that.

With the work that Alison and the CRY team do, they have made both my family’s loss and our diagnoses a lot more bearable. They have been able to answer questions we never thought possible and have ultimately saved my family going through any more anguish. Being diagnosed at 18 was a big shock but I never felt I couldn’t cope with my condition. I was given endless amounts of information and was able to attend counselling sessions with other people who had been diagnosed with similar heart conditions. Being diagnosed with a heart condition is always going to have an impact on your life, whether you’re young or old – but having the opportunity to find out early enough to prevent anything happening is the key.