I am a 31 year old Sergeant in the Army Air Corps and until recently was a Lynx Helicopter pilot and aircraft commander operating in Northern Ireland. I joined the Army at 18 and have spent the past 12 years living an active, healthy lifestyle as a soldier. 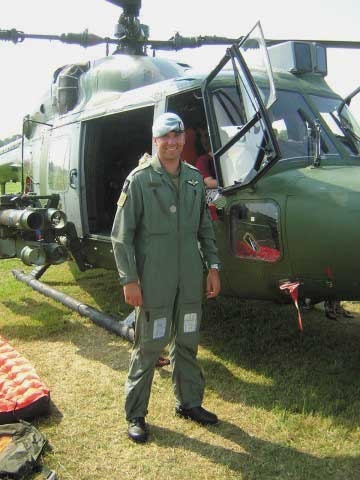 I passed the Army Pilots Course in 2001 and have enjoyed the challenge of flying the Lynx MK7 and MK9 Helicopter. I have served in Germany, Bosnia, Canada, Poland, Cyprus and Northern Ireland.

I am a keen sportsman and have represented my Corps at rugby and windsurfing. I cycled approx 10 miles a day to and from work and considered myself as one of the fittest amongst my work colleagues.

It was Saturday 26th September 2006. I’d been out for a run with my dog Amber in the morning and was heading out for a few beers with the boys that evening. On our return from the club in the car, I found myself sweating and out of breath, it was about 2am. I got home and remember my partner giving me grief for the state I was in. I could feel my heart racing and decided to call an ambulance as I was struggling to remain conscious.

The paramedics arrived in what seemed like minutes and diagnosed me as being in VT (ventricular tachycardia), with a sustained heart rate of 240 bpm. I was rushed to Antrim hospital and was defibrillated back into normal sinus rhythm.

I spent a week in hospital connected to an ECG and showed no further symptoms. I then had an ECHO scan on my heart and exercise stress test on a tread mill and still showed no symptoms of VT. My consultant, Dr Tom Trouton, discharged me with suspected arrhythmogenic right ventricular cardiomyopathy (ARVC) and I was to return at a later date for an angiogram and EP studies. These were both carried out and I was still un-diagnosed. The next step was for me to have a cardiac MRI scan which I would have to wait for 4 months. Luckily the Army paid for my MRI privately at St Georges, which confirmed that I had ARVC.

I was shocked, I considered myself as a healthy and fit guy, with a promising future as a pilot and until that night in September, I’d had no symptoms at all.

On 19th January 2007 I was admitted to the Royal Victoria hospital in Belfast to have my implantable cardioverter defibrillator (ICD) fitted, which will protect me from abnormally fast heart rhythms. I was discharged the same day and am currently on 2 weeks sick leave to recover.

I am slowly coming to terms with the fact I’ll never fly again, or do all the things I’ve enjoyed as a soldier. I am lucky though, I very nearly didn’t make it. I’ve had a lot of help from my friends and family and the Army have re-employed me as an instructor.

I’m already planning a fund raising sponsored walk for the summer to help support CRY. I think their national screening programme is invaluable as most people with my condition are diagnosed when its too late.