Atrial fibrillation (AF) is the most common heart rhythm disorder. It affects around 1-2% of the overall population. It is more common in men and is increasingly common as people age [1]. While it is associated with other medical conditions such as high blood pressure, obesity and other types of heart disease [2], people who are otherwise fit and healthy may still develop AF.

Alerting people to your diagnosis in an emergency 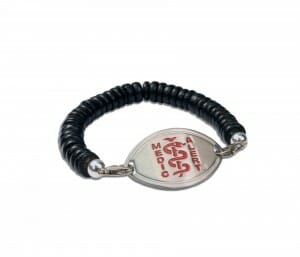 MedicAlert in partnership with myheart It is recommended that anyone with a hidden medical condition carries a form of identification detailing their condition and any medication they are on. This could be in the form of a card placed somewhere visible in your wallet/purse, or an identification bracelet, such as a MedicAlert bracelet. MedicAlert is […]

In the western world it affects mainly young and middle-aged adult men. It has been associated with mutations in the same sodium channel that is affected in long QT syndrome, but this appears to account for only 1 in every 5 people with the condition. The sodium channel behaves abnormally in that movement of sodium ions into the cells is restricted. This results in particular changes on the ECG but no abnormalities in the structure of the heart. Other genes have been described as being involved in Brugada syndrome that produce calcium ion channels and a protein in the cell surface (membrane) that interacts with the sodium channel. They have, however, only been detected in a small number of carriers.

The heart is a muscle and requires a regular supply of oxygen and nutrients to function. This is supplied by blood carried by two blood vessels known as the left and right coronary arteries. The arteries arise from the left and right side of the body’s main artery, the aorta. In up to 1% of […]

The heart is a muscle and requires a regular supply of oxygen and nutrients to function. A network of blood vessels known as the coronary arteries supplies the heart. The coronary arteries can become narrowed by the build up of fatty deposits in the artery wall, called atherosclerotic plaques. Blood clots can form on these […]

Catecholaminergic polymorphic ventricular tachycardia (CPVT) is a rare condition that has been associated with two genes that make proteins found inside the cell – the human ryanodine receptor (a calcium ion channel) and calsequestrin (a protein that interacts with the calcium channel). These regulate the release of calcium ions into the rest of the cell. […]