2002 was the best season of my career in terms of development; I represented England at the Commonwealth Games in Manchester, and also Great Britain at the European Championships in Munich, in the 400 metre Hurdles. So, 2 years later I felt ready to qualify for the Great Britain Olympic Team. However, it wasn’t to be.

From the start of the track season I struggled to run times that I had easily run in previous years. After months of frustration I visited the Olympic Medical institute (OMI), at Northwick Park Hospital. Immediately I was referred to Dr Greg Whyte and his team, who ran the CRY centre there.

I figured it was just a routine check. Greg and Mat discovered an abnormality with my heart rhythm while I was on the treadmill test and that same afternoon Greg took me to see the top cardiologist there, Dr Nigel Stephens. The initial thoughts were that I had what was commonly known as ‘sudden death syndrome’. I can remember Dr Stephens telling me this and immediately I thought he was being a bit dramatic and taking precautions by telling me not to run. I mean, I was the fittest person I knew and here he was telling me that I head a problem with my heart! However, as he continued my ego gave in to my brain and then fear took over – the tears soon followed.

After weeks of further tests and an MRI scan I was told by Dr Stephens that I had right ventricle outflow tract (RVOT) – a less potentially – fatal problem than was initially thought. What was happening to me was that my heart was beating very fast at times, followed by a very slow beat. The abnormality of the heart rhythm was obviously a worry – track and field was out of the equation; devastation for any elite sports person.

I was given a course of medication, which after around 8 months had not cured the problem. After consultation with Greg, Dr Stephens and Dr Roberts (another leading cardiologist), it was suggested that I undergo an operation. All the doctors involved worked tremendously hard to get this operation completed as quickly as possible. It was only a few weeks of waiting before I was admitted for surgery, to be performed by Professor Peters and Dr Stephens.

The operation was radiofrequency ablation and was used to kill the dead tissue in the heart that was causing the problem. It worked. 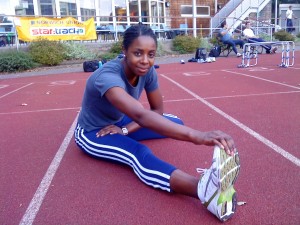 For a while I did quit track and took time to set up my academic career – I work in marketing now. However, it is hard, if not impossible, to get track out of my system. I started training again at the end of 2006 and on 8th July 2007, I ran in the 4×400 metre relay for my athletic club, Woodford Green, for the first time since 2004. It was the slowest time I have ever clocked for the distance and even slower that most of my 400m hurdle performances but, strangely, I enjoyed it and I was proud of myself. It’s hard to explain how I feel now or how this entire situation has affected me because I still feel as though I am getting over it. Physically the body has healed remarkably quickly but mentally the battle continues. It has taken me a while to park the memories of how good an athlete I once was and, honestly, sometimes these thoughts still haunt me. For now I am hopeful that things will fall into place for me in the future. I have my marketing career to focus on and I have discovered there is so much to do when you don’t train 6 days a week!