Looking Back at 25: The ICAP Charity Day and launching CRY’s national screening centre

Our last blog post on CRY’s screening programme focused on the early years. We looked back to when our testing was just getting underway and how we developed over the late ‘90s and early 2000s.

Now let’s fast forward a few years. In 2009, CRY was chosen as one of the charities to benefit from the ICAP Charity Day. ICAP is a large finance company dealing in electrical markets, and on their charity days, the commission earned on any deals brokered during the day is split between selected charities.

CRY was fortunate enough to be chosen thanks to the efforts of one of our supporters, Kent Representative James Brown. James’ wife, Katrina, died suddenly in 2006 when she was just 31 years old.

Charity Patrons are able to attend on the day, with the opportunity to speak to clients on the phone to help close deals. We were thrilled to have CRY Patron Pat Jennings OBE represent us, who attended with CRY’s Founder Alison Cox. He closed two deals in New York and another in Athens, and signed countless autographs, took photos, and shook hundreds of hands along the way as he travelled around the dealing floors at ICAP.

“It was a brilliant day,” Pat said when reflecting on the occasion, “and just so nice that people went to so much trouble for all the chosen charities.”

There was even an auction for ICAP clients and employees to help fundraising even more. We had received a tennis racket from Bjorn Borg 16 years earlier that we were able to enter into the auction, and raised over £1,000. One of our other Patrons, Jeremy Bates, was a big help in making this possible, too. A certificate to authenticate the racket was needed, so Jeremy contacted his friend and former Wimbledon champion Pat Cash, who was playing a tournament in China with Bjorn at the time, to get a certificate signed and returned within two days.

“It was an extraordinary day,” Alison said at the time, “with brokers and ICAP staff all investing considerable time, energy and personal funds in selecting personal themes for dressing-up and creating a colourful uplifting and festive atmosphere – with all profits made going to the selected charities. I was so privileged to be escorting truly one of the most courteous, congenial and accommodating of the UK’s historic sporting heroes.”

All of the funds raised on the day went towards a massive new initiative for CRY in 2010: we were able to offer free screenings to all young people in the South East born in 1995, the year CRY was founded.

This new injection of funds also helped spark a major development in our history: the launch of the CRY Centre for Inherited Cardiovascular Conditions and Sports Cardiology at St George’s Hospital in London on April 28th, 2010.

We used the new CRY centre as the venue for our South East initiative, and it has gone on to become the home of regular screenings over the last 10 years as our national screening centre, overseen by CRY Consultant Cardiologist Professor Sanjay Sharma.

After the funding from the ICAP Charity Day helped get screening at our St George’s centre off the ground, we’ve received tremendous support over the years to develop its operation as our national centre. For instance, we have received funds from numerous trusts (such as the Carval Foundation and The Leathersellers’ Company Charitable Fund), and, of course, from CRY families in memory of those they have lost to a sudden cardiac death.

This includes over £150,000 raised in memory of Tom Clabburn and Claire Prosser, which has made a huge difference to our screening programme. These funds have been put to great use at St George’s as well, covering 11 screening days there (including six in 2016 alone) to test 1,000 young people, and paying for a new echocardiogram machine.

We received a whole year of funding in 2017 in memory of Jack Thompson, which was raised from the BGC Charity Day. This allowed us to hold 25 screenings at St George’s with these funds, and screened a total of 2,399 young people with 127 being referred for further tests.

We have also received valuable support to fund screenings at St George’s in memory of Gary Pope, Sara Pilkington and Amy Osborne.

Unfortunately, due to the COVID-19 pandemic, we have needed to put all screening events on hold until at least the end of August. However, as soon as it is safe to do so, we will be getting back on the road and heading around the UK to provide our usual cardiac screening service, which has still seen phenomenal growth in recent years. We screened over 30,000 young people in a year for the first time in 2019, and we now have a new fleet of screening vans to make sure everything is running as effectively as possible when we’re back. 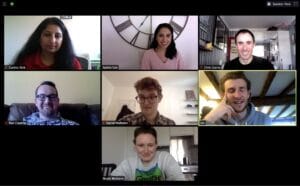 A myheart members’ video meeting will be held between 1pm-3pm on Saturday, 23rd October, 2021. Meetings are free to attend and give members